I’ve done a couple of guests posts recently, and since it gets dark around 2:00 here, I don’t have good pictures to show you of a new project. Perhaps you’ll be kind enough to let me show you these instead?

Up first? A little bird’s nest ornament. Original? Perhaps not. Difficult? Not. at. all. Cute? Uh, yeah! 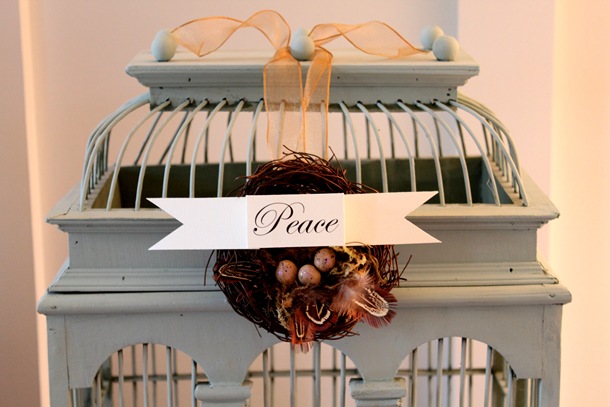 The ingredients for this little ornament are as simple as it gets. 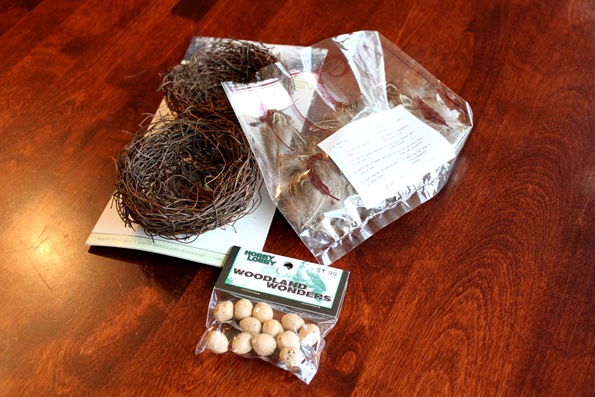 Once you gather your supplies, you just garnish the nest to look the way you want. I used E6000 glue simply because it was closest to me. I imagine hot glue would have worked perfectly. 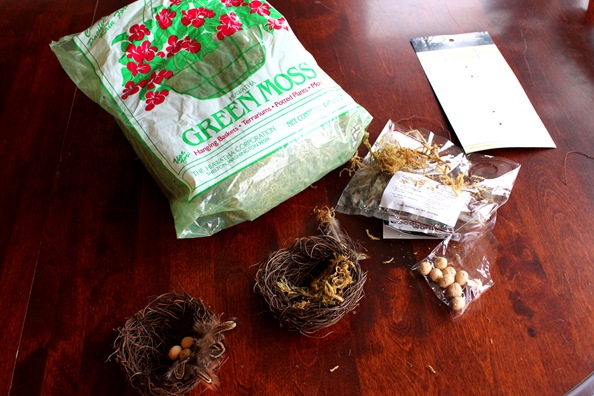 I lined the nest with some glue and smooshed (very technical word) the moss into the nest. 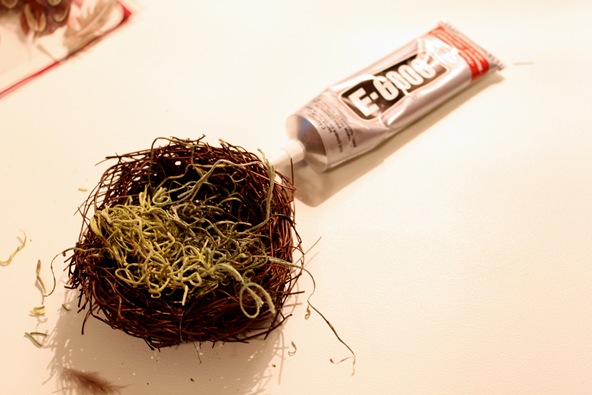 I then put a dab of glue onto the backs of the eggs and placed them in a huddle. I didn’t glue the feathers because they stayed in the moss beautifully. However, I would recommend it—especially if you plan on giving it as a gift or as an adornment (I like that word) on a present. 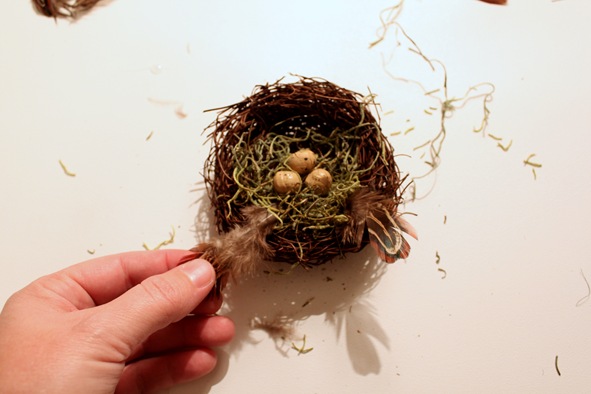 Because I’m a horrible tutorializer, I didn’t take pictures of this next part. I took some ivory cardstock and printed out various sizes and fonts of the word I wanted on my banner. Once I made the selection, I used my paper cutter to cut a long strip along the paper. I folded the ends back, cut the corners, and glued it to the wreath. That’s it! 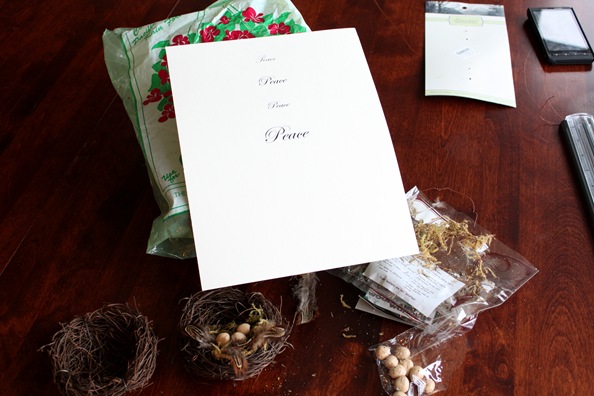 Creasing the banner back adds some dimension to it and helps it stand out from the nest just enough. It’s difficult to tell in the picture, but I touched some white glitter to the eggs for a little sparkle. It’s perfection! 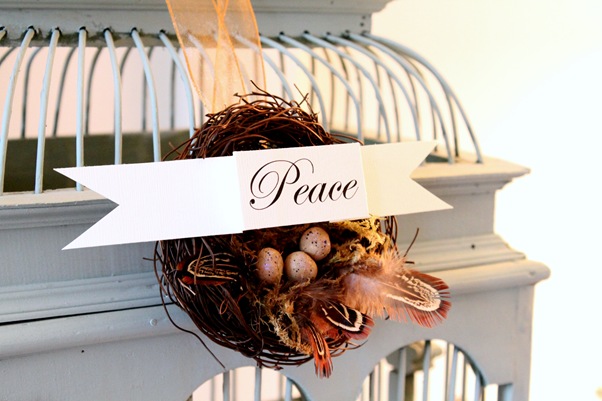 Even my new little reindeer likes it. He says it hurts his neck, but I told him to suck it up in the spirit of Christmas. 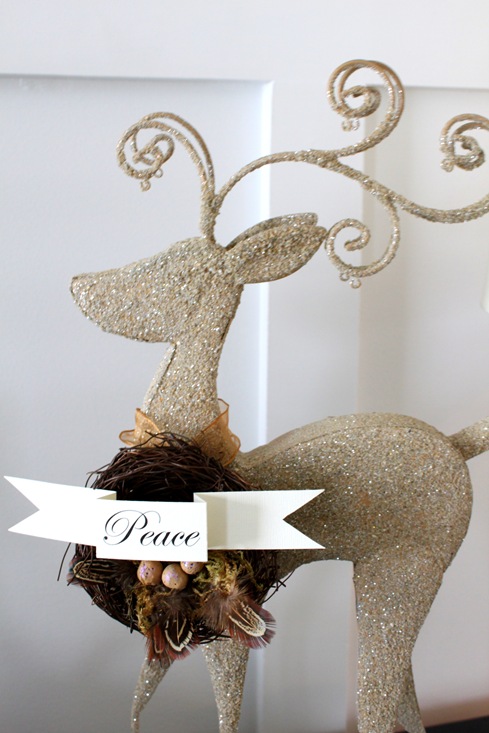 Up next? A little diddy for my kids. They have a bright tree in the front room, so I thought I’d make them some decorations for the walls, as well. I thought for sure I’d break out into hives with all the colors going on in this, but I am happy to report I survived. 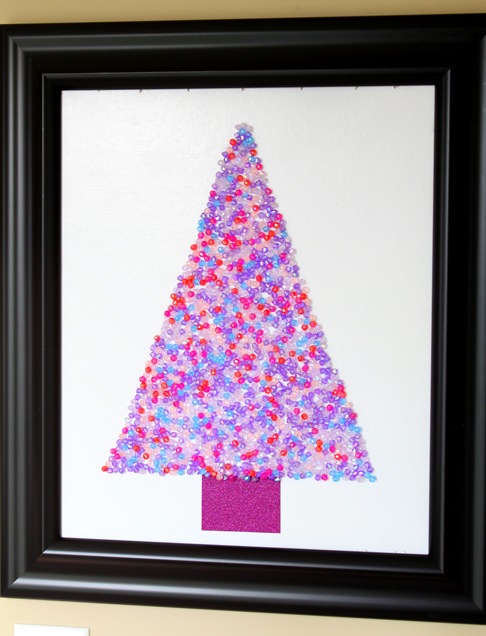 Three goals needed to be met for this project.

The beads were purchased at Michaels for a few dollars, and I outlined the tree on the cardboard to the size I wanted. I would like to say I chose a retro-style tree because I like the look of it, but really it’s because it was the easiest to draw. 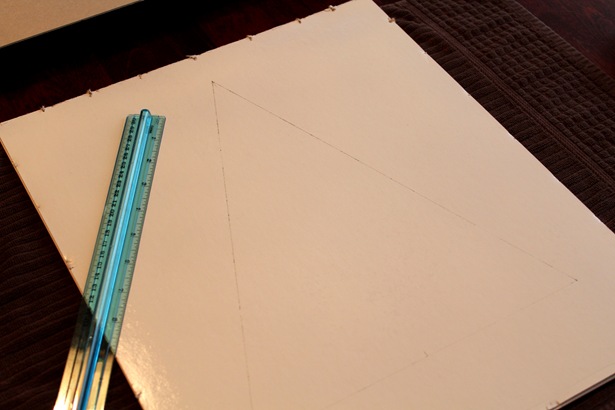 Unfortunately, I completely forgot to get a picture of the next part. I took a sponge brush covered with some craft glue to the inside of the outline and applied it. Once I had the glue all over the tree area, I dumped the beads onto it. Easy enough, right? 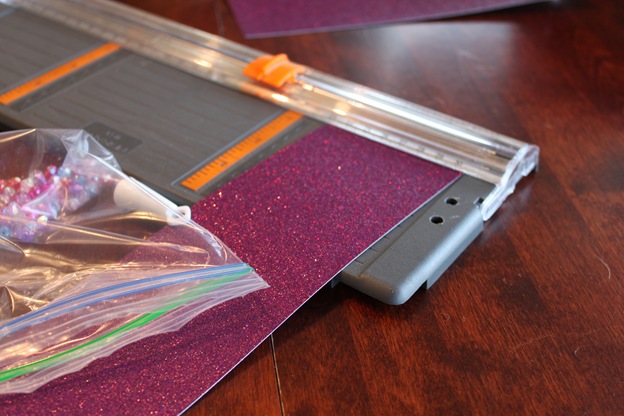 The “trunk” of the tree needed to be a different texture (in my opinion), so I used some glittered scrapbooking paper. I cut it with my cutter and glued it on. 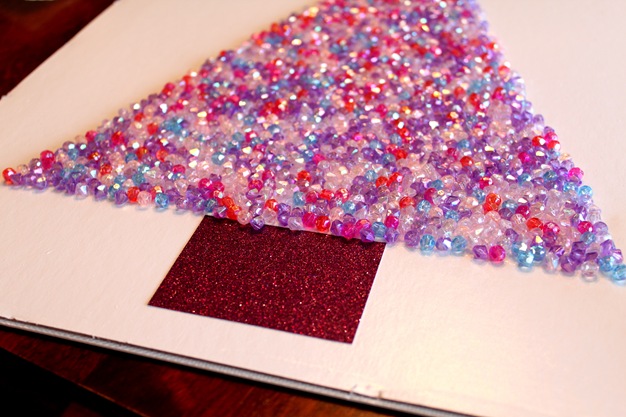 I won’t lie. There were moments when I wanted to take some explosives to this project. As soon as I thought it was done, a bead would fall off. My advice? Use some super adhesive (I used E6000) for those stubborn sections that just don’t want to adhere. 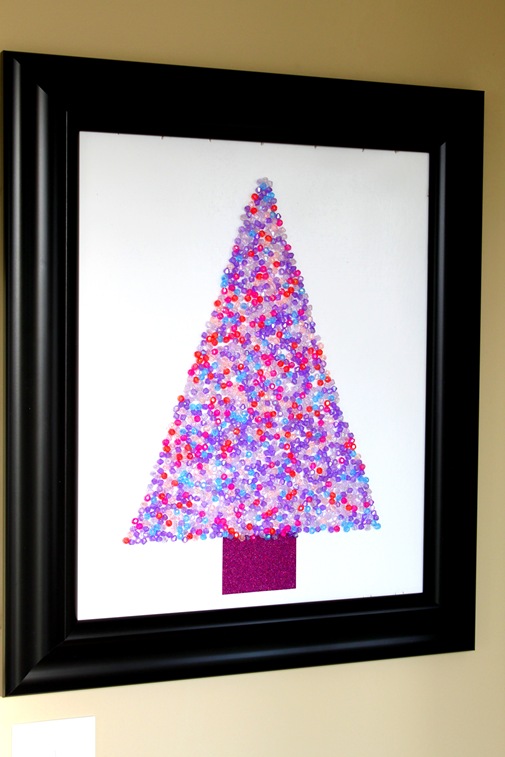 Thanks to Jamielyn and Stephanie Lynn (hey..sensing a theme here!) for letting me post on your blogs! It was fun!